Web applications and websites of any intricacy and size can be designed using PHP. Using this code is not as easy as expected; however, utilizing these frameworks has fuelled the...
We Support
Top

Since PHP is an open-source scripting language there need not be any expenditure on using the language. The fame of PHP gave rise to multifarious developers, among whom are those of high potential. The ease with which the language can be learned as well as with the increased number of available specialists reduce the developmental costs. The fundamental essentials of the app developed can be effectively understood even by amateur developers.

PHP frameworks are the best in the market nowadays while considering other technologies. The prime benefit is the swift loading of web pages, even faster than Python, thereby providing your customers with a better experience, which makes them visit your website repeatedly.

The web apps or sites that make use of PHP frameworks are congenial with Cloud Services, which enables non-hindered progression to the expansion of the web development project. The scalability of the language is further enhanced due to the adaptability of PHP frameworks with several other frameworks. It can be used with Linux, Windows, macOS, and several other operating systems which establishes its reach among a wider audience.

The alliance between the two technologies has been facilitated as PHP furnishes embedded HTML programming. It is even possible to integrate a complete page of PHP with HTML code with the aid of a script. However, here the PHP tags would precede the HTML tags.

Since most of the PHP frameworks offer various web assists and advantages, making it difficult to conclude on a framework. Based on your business necessities you should decide what the best PHP framework is appropriate for its further development. 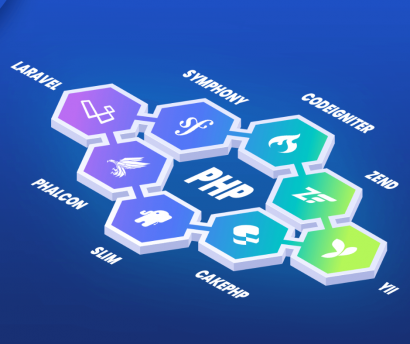 Laravel, released in 2011, is a comparatively young PHP framework despite being loaded with numerous features unique to itself which exhibits relatively unsurpassed expertise in the design, which aims at heightened productivity along with a classic syntax, apart from having a large and dependable community, which is supported by its template engine, routing, authentication as well as security. These features permit it to be used for the creation of complex applications

This is another highly preferred PHP framework that is well-known for its simplified use. With the eminent speed and flexibility, it holds with nominal configuration, CodeIgniter ensures an elevated error handling easily comprehensible documentation.

Equipped with minimal functionality, Slim is a micro-framework that is a surrogate to full-stack frameworks. One shall avoid complexity while beginning a web development project. Besides, a savvy developer can input additions to its functionality whenever there is a requirement. Even though it remains simple in functionality it has several beneficial roles such as URL routing along with session and cookie encryption.

Symfony cannot be called a framework, rather should be acknowledged as a package, inclusive of a set of PHP components and libraries. While it is said to be similar to Laravel, Simfony is generally more complex, to begin with when compared to the latter. Developer engages Symfony for developing web apps due to its modular component, database support, and debugging tool practice apart from the API, microservices, and other web services.

It is a full-stack framework that has a state-of-the-art means of constructing web applications. The enhanced performance guaranteed through the use of this PHP framework is due to its exemplary uses such as the inclusion of code compilation, low-level architecture, security problems, lack of file reads, and memory management.

This is a PHP framework that employs a hierarchical disparity that widgetize content structures. The prime benefits of this framework are the re-usability and improved code organization together with marked-up modularity and complaisance. Fuel PHP is magnificent in its security features such as CSRF output encoding added with XSS, URIs and even filtering of inputs.

PHPixie incorporates independent components which are utilized without changes in any framework. Reduced dependencies with beneficiary modularity are the core merit of the framework. It assures ease of use, improved performance, and low pairing of other components.

At present PHP stands at the summit of the web development world. As PHP is extremely popular and well documented, the development process will take less time. Moreover, due to its flexibility, it can be combined with other web development technologies.

If you desire to have a custom-built web application, feel free to contact us. Our experts will guide you with the best ever technologies in web development to achieve the desired goals by elevating your business, providing you with the best software solutions